The issue of what a trademark is and its legal definition was already discussed in the previous parts of this series.

Now, let us have a closer look at yet another kind of unconventional trademarks (apart from the most popular ones, such as word, word-figurative or figurative marks) – a sound trademark.

A sound trademark is a mark which consists exclusively of a sound, or a combination of sounds.

As regards paper applications for sound trademarks, an application for registration should include a musical notation or an oscillogram placed upon one print in the size not smaller than 8 cm by 8 cm, and not bigger than 10 cm by 10 cm, or upon one A4 sheet.

Here is an example of a sound trademark presented as a musical notation:

For the above mentioned trademark the Polish Patent Office granted a right of protection under no. R.171836 in the name of RADIO MUZYKA FAKTY GRUPA RMF sp. z o. o. sp. k. from Cracow (a popular radio station), and the mark was destined for goods and services in classes 09, 16, 35, 38, 40, 41, 42, 43, such as ”information processing apparatus, loudspeakers, computers, magazines; services in the field of radio, television and cinema advertising, information agency services, printshop services, edition of radio and TV programs, snack bar services and hotel services.”

Below there is an example of a sound trademark presented in the form of an oscillogram. The mark was registered by EUIPO under no. EUTM-012438628 in the name of TWENTIETH CENTURY FOX FILM CORPORATION in respect of goods and services in classes 09, 38 and 42, including among others „scientific, nautical, surveying, photographic, cinematographic, optical, weighing, measuring, signaling, checking (supervision), life-saving and teaching apparatus and instruments; apparatus and instruments for conducting, switching, transforming, accumulating, regulating or controlling electricity; apparatus for recording, transmission or reproduction of sound or images; telecommunication services; radio broadcasting services; television broadcasting services; podcasting services; computer services in the field of providing on-line news and information via the Internet; designing, constructing, updating and/or maintaining on-line databases and search engines; designing, constructing, updating and/or maintaining on-line directories, databases, and search engines for obtaining data on a wide variety of topics and fields; hosting of digital content on the Internet; application service provider; designing, constructing, updating and/or maintaining on-line journals and blogs; design and development of computer hardware and software.”

Apart from a demonstration in the form of an oscillogram, there was also attached an audio file to this trademark: 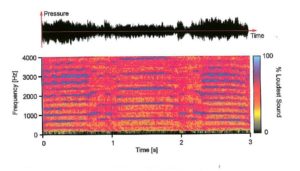 The above mentioned trademark was registered by EUIPO in the name of Edgar Rice Burroughs, Inc. under no. EUTM-005090055 for goods and services in classes 09, 16, 25, 28, 35, 38, 41, 42 and 43, including among others „restaurant services; computer services; entertainment services; broadcasting and transmission of television programs; clothing; electronic games and board games; stationery; motion picture films; sound recordings.”

And yet another example of a sound trademark, also presented in the form of an oscillogram and an audio file, registered by EUIPO in the name of Metro Goldwyn-Mayer Lion Corporation under no. EUTM-005170113 – the so-called „Lion Roar” in classes 09, 38, 41, 42 designated among others for “apparatus for recording, transmission or reproduction of sound and images; telecommunication services; teaching services; movie production; computer software designing.”

A sound trademark may also be represented only as an audio file in MP3 format, and its size should not exceed 5MB.

In the case of sound trademark applications, an audio file can either be sent electronically, or if the application is filed in a traditional way (in paper form) – on the appropriate carrier (a pendrive, CD or DVD). It is important that the sound is not looped.

Below there is an example of a sound trademark – an audio file:

This trademark –  no. EUTM-017942838 – was registered in EUIPO in the name of Merck Sharp & Dohme Corp., a New Jersey Corporation, in respect of goods and services from classes 05 and 44: „pharmaceutical preparations, anti-virus preparations; providing medical information.”

When considering the filing of an application for registration of a sound trademark, a skillful use of which may undoubtedly bring positive economic effects to entrepreneurs from different branches of industry, one cannot forget about some limitations referring to this kind of marks.

Below there is an example of a sound mark – „the barking of a dog” which was not registered in EUIPO in relation to goods in class 31: “Fodder and foodstuffs for pets; bedding and litter for animals”. The mark was found to be descriptive in relation to the goods, for which it had been intended.

And one more example of a sound trademark  considered to be descriptive –„the sound produced upon opening a can containing a carbonated drink” no. EUTM-17912475 applied in EUIPO by Ardagh Metal Beverage Holdings GmbH & Co.KG and designated for various kinds of beverages in classes 29, 30, 32 and 33, and for metal packagings for carbonated beverages in class 06, which was refused registration by EUIPO. The mark was regarded as descriptive, because it was not sufficiently distinctive from the comparable sounds, which are produced upon opening a can containing a carbonated drink, to the extent that consumers would be able to perceive it as an indication of a particular commercial origin.

If another element is added to a sound trademark – for example, a motion, then it will not be a sound mark any more, but a completely different kind of mark – a multimedia trademark.

So if someone has an idea for a trademark – e.g. a combination of sound and motion, then maybe it is worth considering an application for a multimedia mark.

This is going to be the topic for the next article in this series – dealing with multimedia trademarks.

END_OF_DOCUMENT_TOKEN_TO_BE_REPLACED

This website uses cookies to improve your experience while you navigate through the website. Out of these cookies, the cookies that are categorized as necessary are stored on your browser as they are essential for the working of basic functionalities of the website. We also use third-party cookies that help us analyze and understand how you use this website. These cookies will be stored in your browser only with your consent. You also have the option to opt-out of these cookies. But opting out of some of these cookies may have an effect on your browsing experience.
Necessary Always Enabled
Necessary cookies are absolutely essential for the website to function properly. This category only includes cookies that ensures basic functionalities and security features of the website. These cookies do not store any personal information.
Non-necessary
Any cookies that may not be particularly necessary for the website to function and is used specifically to collect user personal data via analytics, ads, other embedded contents are termed as non-necessary cookies. It is mandatory to procure user consent prior to running these cookies on your website.
SAVE & ACCEPT
close
Thanks !