The previous article presented an informational claim, including its genesis and the previous regulation in the Industrial Property Law dated 30th June 2000 (hereinafter referred to as: “IPL”). Today’s article will be devoted to the amendment of the IPL, which has been in force since 27th February 2020 and has changed the regulation of the informational claim in title.

Information Claim in art 286 [2] IPL after the Amendment

First of all, the amended IPL separated the claims for securing evidence previously regulated in art. 286 [1] from securing claims for information. Currently, the claim for information is regulated in a separate article 286 [2]. The legislator has introduced new solutions, and the current wording of the provision does not seem to cause similar interpretation problems as before the amendment. Nevertheless, interestingly enough, it was also decided to return to the provisions that were found as invalid. The provision indicating enumerative catalogue of entities, from which information may also be requested, which is also directly regulated by Directive 2004/48/EC[1], has been restored. Therefore, a request for information may be addressed, respectively, to a person other than the infringer, if it has been stated that the person has the goods infringing the rights specified in the IPL, uses the services infringing those rights, or provides the services used in the activities infringing those rights. The catalogue of entities which de facto share the position of the infringer also includes a person indicated by the above described entities as participating in the production, manufacture or distribution of goods or services infringing a patent, additional protection right, protection right or right of registration. According to the IPL, all these activities are aimed at obtaining, directly or indirectly, profit or other economic benefit.[2]

Such move by the legislator may raise doubts, because as a result of the Constitutional Tribunal’s verdict of 6th December 2018[3] , issued on the basis of the previous wording of article 286 [1] of the IPL, the regulation concerning informational claim against a third party was deemed unconstitutional. The argumentation of the Constitutional Tribunal concentrated on the recognition that the rights granted to the right holders and entities obliged to provide information in the former IPL were disproportionate and it was not guaranteed that the information obtained as a result of the obligation imposed will be used solely to pursue claims related to the infringement of industrial property rights[4]. In other words, the former wording of the provision on the information claim did not guarantee to the entities obliged to provide information proper protection of their business secrets and interfered too much with the freedom of conducting business activity.

The question arises as to whether the current rules are in line with the principles of the above verdict. The legislator has justified the return to previous solution as follows: “(…) the intention (…) to ensure the proportionality of the solution, by ensuring a strong link between the execution of the information claim and the claim for infringement of an industrial property right. (…)”[5].  The provision of article 286 [2] of the IPL in the following paragraphs, i.e. from 9 to 11, makes the above assumption a reality.

Therefore, another and equally important issue is to ensure, through article 286 [2] of the IPL a broader protection of the entities obliged to provide information. As in the provisions of the Code of Civil Procedure concerning proceedings for security or injunction, it is possible for the above mentioned entities to claim redress of damage caused by the fulfilment of the obligation to provide information, if the right holder fails to file an original pleading to institute the proceedings against the infringer of rights specified by the statute within the prescribed time limit set by the court, or if the statement of claim or petition instituting the proceedings is withdrawn, as well as if an action or petition is dismissed or proceedings are discontinued[6].  It is added that such a claim is also valid if the information is used by the right holder for purposes other than to pursue a claim arising from an infringement of industrial rights.[7]

Such a regulation seems to correspond with the guidelines that can be taken from the presented Constitutional Tribunal’s verdict, ensuring a balance between the rights and obligations of both right holders and the obliged parties to provide information.

Finally, it is worth adding that after numerous critical comments by the doctrine and jurisprudence, the Polish legislator, included a reference to the provisions of the Code of Civil Procedure in the newly adopted article 286 [2]. (art. 733, art. 739 § 1, art. 742, art. 744 and art. 745) on proceedings for security or injunction, through the obligation to apply them accordingly.

To sum up, it can be concluded that the amendment of the IPL in its current form is more fully in line with the objectives of article 8 of Directive 2004/48/EC. The legislator, by means of a more precise linguistic approach to the institution in question, has met the critics of the previous regulation, dispelling doubts as to the legal nature of the information claim. Moreover, entities providing information have been secured by granting them an additional claim for compensation for damage caused by the performance of the obligation imposed on them.

[1] Directive 2004/48/EC of the European Parliament and of the Council of 29 April 2004 on the enforcement of intellectual property rights. 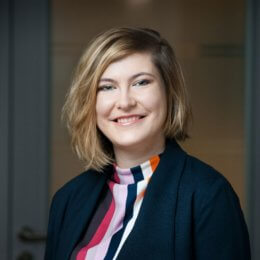 Dominika Fallach is the junior associatet at Patpol Legal. She is a graduate of the Faculty of Law at Kozminski University, and also has a scholarship of the ERASMUS + program at the University of Vaasa in Finland. She completed a summer law school of intellectual property, organized by the IPR University Center in Helsinki. Dominika started her attorney apprenticeship in 2021. Contact with the author

END_OF_DOCUMENT_TOKEN_TO_BE_REPLACED

Facebook Twitter Pinterest linkedin Telegram
To stay within the theme of information claim introduced by Industrial Property Law dated 30th June 2000 r. (hereinafter referred to as: “IPL”) this article will concern the issue of protection of information provided at...

END_OF_DOCUMENT_TOKEN_TO_BE_REPLACED

Patent on the service of the State

In less than a week ago the World Health Organisation characterized COVID-19 as a pandemic. It affects people within different and basic aspects of their lives. Nowadays, we ponder how this situation will impact the economy, mainly entrepreneurs. Therefore, the wide discussions about new regulations  concerning employees and employers is being conducted. However, my aim is to introduce our Readers-  entrepreneurs and often patent holders, to the regulations which allows the State to use their patents in case of a threaten of broadly understood public interest.

END_OF_DOCUMENT_TOKEN_TO_BE_REPLACED

Information claim in the Law on Industrial Property. Part 1

Facebook Twitter Pinterest linkedin Telegram
Disputes relating to intellectual property rights infringements are complex especially in terms of evidence presented during legal proceedings. On many occasions, such complexity results not only from the key issues of the problem itself but...

END_OF_DOCUMENT_TOKEN_TO_BE_REPLACED

The devil is in the details, or from when one should count the 5-year period, during which it is possible not to use one’s trade mark without consequences?

Our clients frequently ask the question when exactly the obligation to start to use a trade mark arises, or in other words, from when the absence of genuine use may render the mark vulnerable to declaring lapse due to non-use. The continuous period, after which the holder of registration is at the latest obliged to put his mark to genuine use, in order to avoid negative consequences for its exclusive right, lasts 5 years.